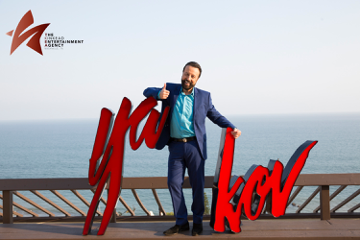 Tickets to access the event are $25 per person and go on sale TODAY at TicketOmaha.com. There is also a meet and greet option for $50.  After completing the purchase, you will receive an email confirmation providing you with instructions on how to access the performance.

Yakov Smirnoff is a Russian immigrant who loves America and being American. UNITED WE LAUGH is a 75-minute comedy special by Smirnoff. He’s an iconic comedian, movie star, best-selling author and most recently, he earned a doctorate degree in Leadership from Pepperdine University. Living a life that’s as exciting as ever, Yakov has married his sweetheart, is currently touring the world doing stand-up, and even has his very own theater in Branson, Missouri. With the heart of a dreamer, Yakov Smirnoff has made the impossible possible and continues to inspire others with his message that America is still "What a Country!" Keep an eye out for his brand-new podcast on ABC radio.

Smirnoff soared to the top of the comedy world performing on "The Tonight Show" with Johnny Carson and countless other television programs, including as a regular character on "Night Court" and the star of his very own show, named after his famous catch-phrase, “What a Country!” He branched out to the big screen where he starred in movies with Tom Hanks, Robin Williams, and Jack Nicholson to name a few.