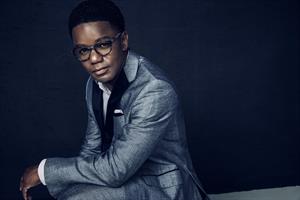 Tickets starting at $19 are available at TicketOmaha.com, in person at the Ticket Omaha* Box Office located inside the Holland Performing Arts Center, 1200 Douglas Street, or by calling 402.345.0606.

Educator, vibraphonist and composer, Stefon Harris has been heralded as “one of the most important young artists in jazz” by The Los Angeles Times.  A four-time GRAMMY™ nominee, he is a seven-time Best Mallet player by the Jazz Journalist Association, the recipient of Lincoln Center’s Martin E. Segal Award, Downbeat’s Critics Poll Winner for Vibraphone (2015, 2013) and 2014 Expanded Critic’s Poll for Vibes from Jazz Times. He won a 2014 NAACP Image Award for Outstanding Jazz Album for Wonder: The Songs of Stevie Wonder as a member of the SF Jazz Collective.

University of Nebraska Omaha (UNO) students will have the opportunity to perform with and learn from Harris at the Great Plains Jazz Festival on Saturday, February 29. Prior to the festival, Harris will lead a clinic and rehearse with high school jazz students at the Holland Performing Arts Center.

Harris earned a Bachelor of Music in classical percussion and a Master of Music in jazz performance from Manhattan School of Music. He tours worldwide with his bands Sonic Creed, Blackout and Ninety Miles. Harris teaches at New York University and is Artistic Director of Jazz Education at New Jersey Performing Arts Center (NJPAC).

He has been Artist in Residence at Fontana Chamber Arts, Kalamazoo, The Lied Center in Lincoln, Nebraska, and San Francisco Performances. Harris currently teaches at the Brubeck Institute through their Distance Learning program and at the Institute’s Summer Jazz Colony. Stefon’s landmark TED Talk, “There are No Mistakes On The Bandstand” was the most watched in its 2011 release and has over 500,000 views. He has emerged as a leading presenter in Corporate Leadership workshops with Fortune 100 companies around the world.  In 2014 Stefon cofounded The Melodic Progression Institute with business partner Clif Swiggett. Their first app, Harmony Cloud™ was released on iTunes in January 2016.