One Night of Queen Performed by Gary Mullen and The Works 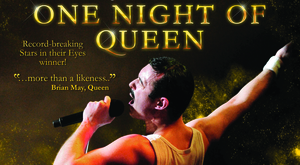 One Night of Queen–the amazing tribute to superstar Freddie Mercury and immortal band Queen–will perform at the Orpheum Theater, Friday, March 13, 2020 at 8:00 PM. If you missed Omaha’s sold out show last year here is your chance!

Since May 2002, One Night of Queen has performed throughout the United Kingdom, United States, Europe, South Africa, and New Zealand to sold-out audiences. They have twice rocked the prestigious BBC Proms in the Park, in front of an enthusiastic crowd of 45,000. 2020 marks their 13th consecutive US tour.

The show provides hit after hit of Queen’s “never-to-die” anthems including “We Will Rock You,” “Bohemian Rhapsody,” “A Kind Of Magic,” “I Want To Break Free,” and “We Are The Champions.”

One Night of Queen is a spectacular live concert, recreating the look, sound, pomp, and showmanship of arguably the greatest rock band of all time. This show will ROCK you!