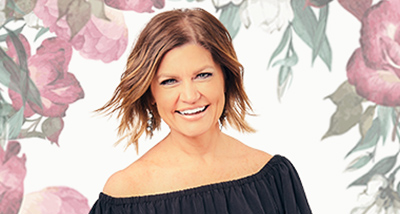 Internet sensation Heather Land will continue to delight fans and audiences with her comedy and music when she hits the road on the Heather Land: i ain’t doin it Tour, stopping at Omaha's Orpheum Theater Wednesday, September 12, 2018 at 7:00 PM.

Practically overnight, Heather burst through the clutter of the online world with her hilarious and witty videos, which have garnered more than 300 million views. And she’s captured the attention of more than 2.5 million followers on Facebook.

After privately sharing her hilarious musings about the oddities of daily life to her immediate friends, they dared her to share them publicly. When she reluctantly posted online, millions of people shared the videos and a true social media star was born.

Over the course of only a few months, Heather’s videos have been shared by celebrities like Miranda Lambert and social tastemakers, immediately connecting with her down-to-earth personality and reaching hundreds of millions of people in the process.

Heather’s audience was first drawn in by her quick wit filtered through a high pitched SnapChat voice changer, but they have remained connected to her because of the way she shows us how to laugh at the chaos we all live through on a daily basis.

Now they will see her in person for a solid night of comedy as she says, “Full of crazy things I ain’t doin (and a lot of mess I’ve already done). I’m also bringing some music your way so get ready!” There’s a VIP meet-n-greet before the show.

Heather Land is a single mom who grew up in Tennessee and has a knack for finding the funny out of the frustrating. Leaving no stone or situation left unturned, she hilariously unravels everyday events — inviting audiences to laugh not only at each other, but also (more often than not), at ourselves. From ex-husbands to failed diets, her take on topics delivers consistent comedy in a charming, self-deprecating style that has made her adored by millions of people of all ages.

Heather shares her comedy at live events, regularly selling out venues across the country. What may surprise audiences the most is that she’s a songwriter who plays the keyboard and sings her original songs. Many of her pieces are about love and loss. She says, "The truth is, we all deal with loss and we all deal with hurt and heartache. Sometimes you’ve got to laugh or you’re gonna cry. I’ve found this way for myself of being able to turn some hurtful situations into humor.”