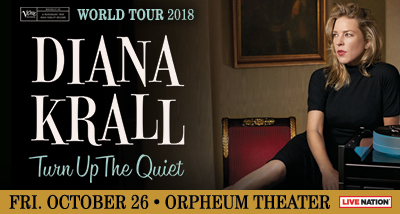 “A voice at once cool and sultry, wielded with a rhythmic sophistication”
- The New York Times

“Had there been an intermission, most probably would have stayed in their seats, captive to the spell that Krall cast.”
-Nashville Arts (review on 2/14/18)

Multiple GRAMMY® Award-winning jazz pianist and world-renowned singer, Diana Krall continues with the fourth North American leg of her international “Turn Up The Quiet World Tour” that has visited more than 100 cities in Europe and North America.

Having previously visited Europe and South America, the “Turn Up The Quiet World Tour” has been wowing audiences with material from Krall’s stunning latest album Turn Up The Quiet (Verve Records) and has now become the biggest in Ms. Krall’s career.  Earning critical praise, DOWNBEAT Magazine called the album "spellbinding… Krall knows how to put her own distinctive stamp on decades-old standards, making them sound fresh and vibrant."

Turn Up The Quiet holds significant importance as it was the last recording Krall made with her long-time mentor and collaborator, producer Tommy LiPuma, before his sudden passing last year and is dedicated to his memory.

Diana Krall is the only jazz singer to have eight albums debut at the top of the Billboard Jazz Albums chart. To date, her albums have garnered five Grammy® Awards, ten Juno® Awards and have also earned nine gold, three platinum and seven multi-platinum albums. Krall's unique artistry transcends any single musical style and has made her one of the most recognizable artists of our time.