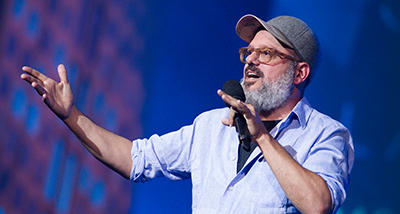 "I am beyond aroused to get back out on the road and bring my very special, artisanal small batch hand crafted, 100% organic jokes & jibberings to a venue near you,” stated Cross. “These jokes are kid tested and mother approved so bring the whole family!”

The “David Cross: Oh Come On” tour is David’s first full tour since his 2016, “Making America Great Again” tour, which toured throughout North America and Europe, producing the Netflix special of the same name and the Grammy nominated CD, “…America…Great.”

On the big screen, Cross wrote and directed the independent film, “Hits,” which premiered at Sundance and is streaming on Netflix, and he has appeared in the independent features, “Kill Your Darlings” alongside Daniel Radcliffe and Michael C. Hall, and the dramedy “It's a Disaster,” opposite Julia Stiles and America Ferrera. Other film credits include “Abel,” “Year One,” Christopher Guest’s “Waiting for Guffman,” “Men in Black” and “Men in Black II,” “Ghost World,” Michel Gondry’s “Eternal Sunshine of the Spotless Mind,” “Pitch Perfect 2,” “I’m Not There,” and provided his vocal talents for several animated films, including “Megamind,” the Kung Fu Panda franchise and “Curious George.”