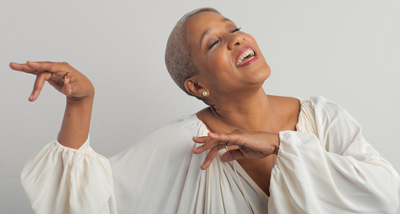 The 1200 Club is sponsored by C & A Industries and Mutual of Omaha. Hilton Omaha is a hospitality sponsor for Marie’s performance.

Tickets are $30 in advance or $35 on the night of the performance. Tickets are available at the Ticket Omaha* Box Office inside the Holland Performing Arts Center, online at TicketOmaha.com or by calling 402.345.0606.

In a span of two decades, 11 recordings and countless stage performances, René Marie has cemented her reputation as a singer and composer, arranger, theatrical performer and teacher. Her body of work is musical, but it’s more than just music. It’s an exploration of the bright and dark corners of the human experience, and an affirmation of the power of the human spirit.

Marie joined the Motéma label with the 2011 release of “Voice of My Beautiful Country,” followed later that same year by “Black Lace Freudian Slip.” Her 2013 follow-up, “I Wanna Be Evil: With Love To Eartha Kitt,” earned a Grammy nomination in the Best Jazz Vocals category.

Other performances this season include: