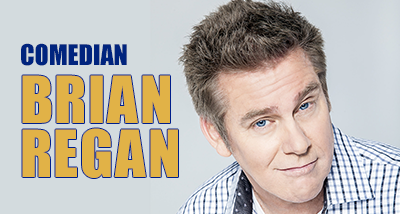 Brian Regan visits nearly 100 cities each year, selling out the most beautiful venues in North American. A regular on The Tonight Show Starring Jimmy Fallon, Regan has made 28 stand-up appearances on The Late Show with David Letterman, the most of any comic in the show’s 22 years on CBS.

Regan’s previous stand-up special, Brian Regan: Live from Radio City Music Hall (2015), was the first-ever live broadcast of a stand-up special in Comedy Central’s history. The special was critically acclaimed with Vanity Fair calling Regan, “The funniest stand-up alive.” He made a scene-stealing cameo in Chris Rock’s film, Top Five, and was a guest on Seinfeld’s Comedians in Cars Getting Coffee.

*Ticket Omaha is the official ticket source for the Orpheum Theater and Holland Performing Arts Center. Ticket buyers who purchase tickets from a ticket broker or any third party run the risk of overpaying, purchasing illegitimate tickets and should be aware that Omaha Performing Arts is unable to reprint or replace lost or stolen tickets from these sources and is unable to contact patrons with information regarding time changes or other pertinent updates regarding the performance.