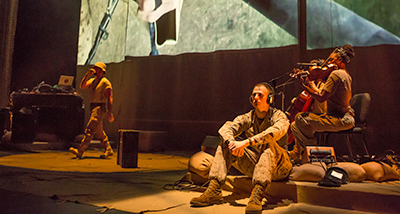 OMAHA, Neb. – (September 6, 2016) – Experience the digital stories of soldiers and their families when BASETRACK LIVE comes to Omaha’s Orpheum Theater Friday, October 7, 2016. Tickets for the 8:00 PM Omaha Performing Arts Special presentation can be purchased at TicketOmaha.com, or at the Ticket Omaha box office in the Holland Performing Arts Center, 1200 Douglas Street.

Named one of the top 10 performances in 2014 by The New York Times, BASETRACK LIVE is an extraordinary work of documentary theater.

Two actors play the real life characters of AJ and Melissa Czubai, a young Marine and his wife. We follow their journey through his deployment to Afghanistan and back home again, including the birth of their child while AJ is overseas and his injury that sends him home.

Based on the website One-Eight Basetrack launched by Teru Kuwayama, featuring photographs by Balazs Gardi and a small group of independent journalists, BASETRACK LIVE brings their story to light along with other Marines with whom AJ served. It shows how much ordinary people change during extraordinary experiences, such as war.