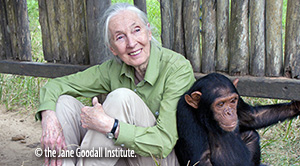 “Gombe & Beyond: An Evening with Dr. Jane Goodall” at the Holland Center Friday, March 11

Omaha, Neb., (February 11, 2016) – Omaha Performing Arts announces Jane Goodall, Ph.D., DBE, world-renowned ethologist and conservationist, founder of the Jane Goodall Institute and UN Messenger of Peace, has been added to the 2015/2016 Season. Omaha Performing Arts presents An Evening with Dr. Jane Goodall in Kiewit Hall at the Holland Performing Arts Center on Friday, March 11, 2016 at 8:00 PM. The event is free to the public, but tickets are required, and are available at TicketOmaha.com, 402-345-0606 or at the Ticket Omaha Box Office inside the Holland Center, 1200 Douglas St. This event is sponsored by MANGELSEN – Images of Nature Gallery.

In her speech, Gombe & Beyond, Dr. Goodall will bring her audience into the world of the Gombe chimpanzees―from her early observations and experiences to the latest news and stories from the field. She will share her latest publication, “Seeds of Hope”, which dives into the world of plants, exploring interesting anomalies about the natural world and how we can protect the place we call home.

Dr. Goodall will also share information about the work of the Jane Goodall Institute, and provide insight into the person behind the globe-trotting international icon: a UN Messenger of Peace, Dame of the British Empire, and the subject of countless articles and television programs around the world. She will also discuss the current threats facing the planet and her five reasons for hope in these complex times, encouraging everyone in the audience to do their part to make a positive difference each and every day.

DONATE CELLPHONES
Audience members are encouraged to bring old and unused cellphones to this event for the Jane Goodall Institute to recycle them through their partner ECO-CELL. A critical component of cellphone batteries is the mineral coltan and eighty percent of the world’s supply of coltan is found in the Congo – the largest habitat for great apes. Cellphones donated at this event will help reduce the demand for coltan and raise funds for the conservation of wild chimpanzees.

JANE GOODALL
In July 1960, Jane Goodall began her landmark study of chimpanzee behavior in what is now Tanzania. Her work at Gombe Stream would become the foundation of future primatological research and redefine the relationship between humans and animals.

In 1977, Dr. Goodall established the Jane Goodall Institute, which continues the Gombe research and is a global leader in the effort to protect chimpanzees and their habitats. The Institute is widely recognized for innovative, community conservation and development programs in Africa, and Jane Goodall’s Roots & Shoots, the global environmental and humanitarian youth program celebrating their 25th anniversary this February.

Dr. Goodall founded Roots & Shoots with a group of Tanzanian students in 1991. Today, Roots & Shoots connects hundreds of thousands of youth in more than 130 countries who take action to make the world a better place for people, animals and the environment we all share.

Dr. Goodall travels an average 300 days per year, speaking about the threats facing chimpanzees, other environmental crises, and her reasons for hope that humankind will solve the problems it has imposed on the earth.

Dr. Goodall’s honors include the French Legion of Honor, the Medal of Tanzania, and Japan’s prestigious Kyoto Prize. In 2002, Dr. Goodall was appointed to serve as a United Nations Messenger of Peace and in 2003, she was named a Dame of the British Empire.