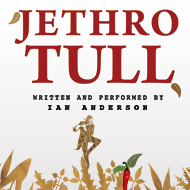 
OMAHA, Neb. – November 18, 2015 – The new JETHRO TULL concert tour, in which Ian Anderson celebrates the life and times of English agriculturalist Jethro Tull, comes to Omaha for the first time since 1977 for a concert at the Holland Performing Arts Center on Tuesday, April 5, 2016 at 7:30 p.m.

Ian Anderson is known as the legendary frontman for the classic rock band Jethro Tull and reimagines his namesake with a narrative set in the near future. The show presents some of the best known songs from the repertoire of the band Jethro Tull, including Heavy Horses, Farm On The Freeway, Songs From The Wood, Aqualung, Living In The Past, Wind-Up, A New Day Yesterday, The Witch’s Promise, and Locomotive Breath, sometimes with slightly re-written lyrics to better tell the tale.

In JETHRO TULL, Anderson touches on topical issues including including climate change, intensive food production, and population growth. New material specially written for this show includes Prosperous Pasture, Fruits Of Frankenfield, And The World Feeds Me, Stick, Twist, Bust, and The Turnstile Gate.

Blogcritics’ Jon Sobel writes that Ian Anderson has “got plenty of creative tricks up his sleeve.” Philly.com’s A. D. Amarosi says that the show is “something new” and “weirdly winning.”

Anderson is accompanied by David Goodier (bass), John O’Hara (keyboards), Florian Opahle (guitar), Scott Hammond (drums) and surprise virtual guests on screen including Ryan O’Donnell who shared the stage with Ian in recent tours for HOMO ERRATICUS and THICK AS A BRICK, and Icelandic singer/violinist/actress Unnur Birna Björnsdóttir who appears on screen throughout the show.

In addition to U.S. dates in April and October 2016, JETHRO TULL will be performed by Ian Anderson in Czech Republic, Sweden and Germany plus more cities and countries to be announced. Watch for tour dates and much more information at www.jethrotull.com
TAGS