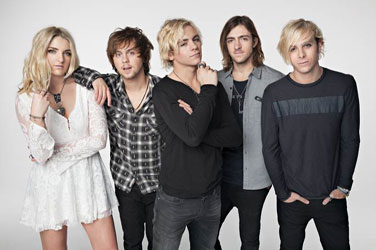 R5 fan club members will have first access to concert tickets through the band’s fan club presale beginning Wednesday June 17 at 10 a.m. local time until June 18 at 10 p.m. local time. Tickets for the tour will go on sale to the general public in select cities starting Friday, June 19 at 10 a.m. local time. VIP packages available for the summer tour will also be available for the winter dates. For more information and full details, please see below and visit www.R5Rocks.com and www.AXS.com.

R5’s highly-anticipated sophomore album Sometime Last Night is due out July 10 worldwide. The album is available for general public pre-order (U.S. only) HERE and the current single “Let’s Not Be Alone Tonight” has amassed more than 5 million views on Vevo and YouTube.

Building further excitement for the album’s release, R5 debuted two tracks – “All Night” and “F.E.E.L. G.O.O.D” – on Jimmy Kimmel Live! last week and will perform on ABC’s Good Morning America on July 13 & LIVE! with Kelly and Michael on July 16.

As previously announced, the Sometime Last Night tour kicks off this summer on July 7 in Orange Park, Fla. at the Thrasher-Horne Center for the Arts and will include stops in Boston, Pittsburgh, Milwaukee, Kansas City, Houston, San Jose, Phoenix, and Los Angeles’ famed Greek Theatre. The 30+ date leg will feature special guests Jacob Whitesides and Ryland.

ABOUT R5:
Led by vocalist/rhythm guitarist Ross Lynch, R5 came together in 2009 and is comprised of Lynch's siblings Riker (bass/vocals), Rocky (lead guitar/vocals) and Rydel (keyboard/vocals) and friend Ellington “Ratliff” (drums/vocals). R5 has rapidly emerged as an exciting new voice in the world of pop rock. The band has moved one step closer to world domination with the release of their upcoming sophomore album, Sometime Last Night, the follow up to their hit debut album LOUDER, which rocketed to No. 1 on iTunes in 10 countries upon its September 24, 2013 release. The band has recently appeared on Good Morning America, Ellen, LIVE! with Kelly & Michael and Jimmy Kimmel Live!

Riker most recently finished as runner-up on Season 20 of ABC’s smash hit Dancing With The Stars, consistently receiving top scores from the judges and fans alike.

Ross currently stars as Austin Moon, one-half of an internet music duo, on the Disney Channel’s hit comedy series Austin & Ally, which is in its fourth and final season. Ross won his third consecutive Kids’ Choice Award for Favorite TV Actor for his role on the show and just received Teen Choice’s Choice TV Actor: Comedy nomination (he was nominated and won this category last year). This summer, fans will be able to catch him on the silver screen as modern day surfer Brady in the Disney Channel Original Movie Teen Beach 2, the sequel to 2013’s smash hit Teen Beach Movie.

The band self-released their first EP, Ready Set Rock in 2010 and signed with Hollywood Records in April of 2012 and released their second EP, Loud, on February 19, 2013. The quintet starred in a 5-part VEVO series titled “R5 on R5,” which saw cameras follow them on a 2013 sold-out tour that included shows in the U.S., Canada, Australia, England and France. The band made a triumphant return to Europe in early 2014 and recently released a six-part VEVO series, R5 Live in London, capturing the mania of R5 fans during a magnetic show in London this past March. The band recently brought R5: All Day, All Night to the big screen for one night only. The documentary takes a never-before-seen look at the band’s career from inception to the present and includes exclusive interviews, concert footage and footage from the band’s early years.