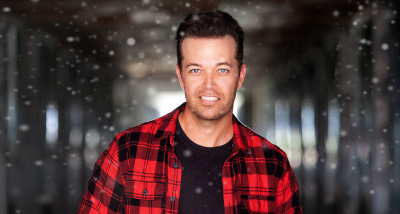 **Update: this performance has been canceled**

OMAHA, Neb. (November 9, 2020) – Omaha Performing Arts is excited to announce “Christmas in our Town” with Nebraska native and country artist Lucas Hoge. Hoge will perform at the Holland Performing Arts Center on Thursday, December 3 at 7:30 PM.

Tickets starting at $27.50 go on sale at TicketOmaha.com on Thursday, November 12 at 10 AM. There is limited seating capacity for social distancing and masks are required.

Hoge, singer and song writer, grew up in Hubbell, Nebraska where he learned to hunt, fish, write songs and play guitar. He kickstarted his career when he moved to Nashville, TN. Hoge is best known for his Billboard No. 1 charting album Dirty South and hits he’s performed across the U.S. and on the legendary Grand Ole Opry stage, including “Wishin’ I Was Fishin’” and “Power of Garth.”

In “Christmas In Our Town” Hoge and his Nashville- based band take audiences on a holiday journey guaranteed to lift spirits and set a festive holiday mood. With his warm and mellow voice, Hoge blends country, pop and gospel influences to bring a homey feel to this special time of year.  Expect a delightful and charming evening of original and classic songs of the season in a concert inspired by his love for all things Christmas and his cherished memories of the holiday in his own hometown.

During the pandemic Hoge has shared his comfort through faith with his #SundaySessions livestream that amasses millions of views weekly. Hoge’s series “Hoge Wild” which follows the singer as he travels the world hunting, fishing, diving and performing aims to change the narrative around wildlife conservation and has been renewed for a second season on the Sportsman Channel.