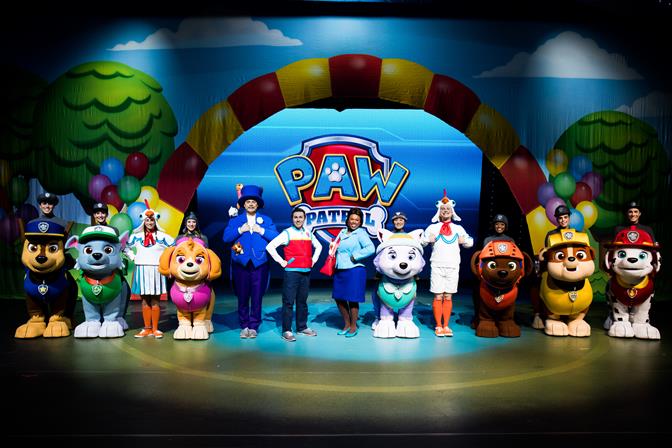 Join Your Favorite Pups For A Heroic Musical Adventure
returning to the Orpheum Theater January 12-13, 2018

OMAHA, Neb. (May 9, 2017) – PAW Patrol Live! “Race to the Rescue” based on hit preschool series PAW Patrol, which airs on Nickelodeon and is produced by Spin Master Entertainment, will visit Omaha’s Orpheum Theater on January 12 and 13, 2018. PAW Patrol Live! presented by Pedigree, brings everybody’s favorite pups to the stage for an action-packed, high-energy, musical adventure. When Mayor Goodway goes missing during the day of The Great Adventure Bay Race, the pups come to the rescue. Join Ryder, Chase, Marshall, Rocky, Rubble, Zuma, Skye and Everest when they visit Omaha. Performance tickets are on sale Monday, May 22, 2017 online at TicketOmaha.com, in person at the Ticket Omaha Box Office located inside the Holland Performing Arts Center, 1200 Douglas Street, or by phone at 402.345.0606.

Featuring a cast of everybody’s favorite PAW Patrol characters and presented by VStar Entertainment Group and Nickelodeon, PAW Patrol Live! shows that “no job is too big, no pup is too small,” and shares lessons for all ages about citizenship, social skills and problem-solving as the characters each use their unique skills and teamwork. The show includes two acts and an intermission, and engages audiences with Bunraku puppetry, an innovative costuming approach that brings the PAW Patrol characters to life on stage with their vehicles and packs.

“Using Bunraku, puppetry elements are built into costumes worn by real actors to create a wonderful combination of life-size pups and to make a stronger connection with the audience. The PAW Patrol cast sings and dances, which brings a fun, realistic parallel between the animated series and the live show,” says Jim Waters, producer, VStar Entertainment Group.

The performance features up-tempo music and a brand new cleverly written script that is a good introduction to live theater for kids. Classic theatrical scenery along with a high-tech video wall visually transports families to an authentic PAW Patrol environment, including locations from the TV series, like Adventure Bay, The Lookout, Seal Island, Farmer Yumi's farm and Jake's Mountain. Special interactive video allows the audience to participate via interviews, solve clues with the Pups, follow Mayor Goodway and much more.

PAW Patrol Live! “Race to the Rescue” Coming to Omaha!

Tickets are available at Ticket Omaha.com, in person at the Ticket Omaha Box Office inside the Holland Performing Arts Center, 1200 Douglas Street or by phone at 402.345-0606.


VStar Entertainment Group is one of the nation's leading multi-concept media and entertainment platforms and producer of family-friendly consumer shows and events, with an extensive background presenting and promoting more than 36,000 performances worldwide over the past 37 years. Headquartered in the Twin Cities, VStar Entertainment Group was founded in 2015 following an acquisition of VEE Corporation, one of the most experienced and respected names in family-friendly entertainment, and Blue Star Media, a leader in event production and promotion. VStar Entertainment Group also provides turnkey, in-house solutions for agencies, brands, corporations and marketing experts serving the event, sports and experiential industries. For more information, including current touring shows and a complete list of service offerings, please visit www.vstarentertainment.com.

Nickelodeon, now in its 37th year, is the number-one entertainment brand for kids. It has built a diverse, global business by putting kids first in everything it does. The company includes television programming and production in the United States and around the world, plus consumer products, online, recreation, books and feature films. Nickelodeon's U.S. television network is seen in more than 90 million households and has been the number-one-rated basic cable network for more than 20 consecutive years. For additional information or artwork, visit http://www.nickpress.com. Nickelodeon and all related titles, characters and logos are trademarks of Viacom Inc. (NASDAQ: VIA, VIAB)